It’s been languishing there for sometime…with quite the name to follow….Boisfeuillet Jones

Atlanta Civic Center. But times have changed since 1967. I remember going to see the Lion King here and would miss much of the show because if you did not have a dead center seat, the show was off to the side.

Now, imagine….Film and television studios surrounded by a performing arts center, a hotel, along with residential, office and retail could transform the downtown Civic Center property into a regional tourist destination. The site is actually in what is often called no-mans land, since the Downtown CID and the Midtown CID don’t cover the area.

But the location certainly IS close enough to draw off either visitors/residents of Midtown Atlanta as well as visitors in the Downtown Atlanta area attending conventions and visiting other tourist attractions like the Football Hall of Fame, World of Coke and the Aquarium.

The city is in the initial process of getting a real estate broker in place and issuing a RFP (request for proposal) as to what the site could be turned into.

In the Atlanta Business Chronicle, Carter is the one proposing such an exciting change to the site.

Bob Peterson, Carter’s chairman and CEO, said the firm is putting together a team that specializes in entertainment-oriented developments and movie-television production facilities. “The idea of studios with pre-production and post-production facilities, live TV and live audiences is not unique, but seeing that conceptually in Atlanta is new,” Peterson said.

Carter officials have had “a number of conversations” with a potential studio operator that he described as capable, reputable and financially sound.

The potential redevelopment of such a site (some 19 acres in fact) just shows there is still room for some exciting projects to come to live in Midtown Atlanta and the surrounding area. Keep in mind, the Civic Center MARTA station will also help this be a transit-oriented development…something we certainly need in Atlanta.

I’ll be keeping an eye on this project for sure! 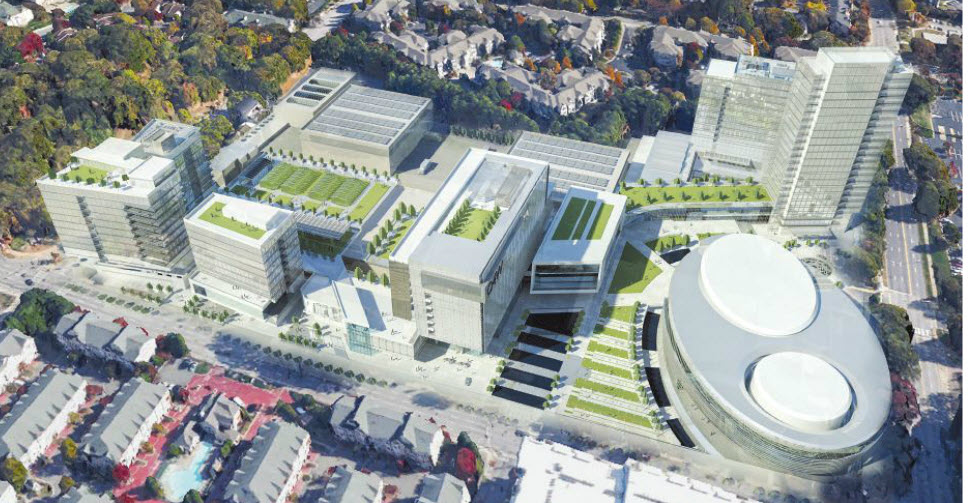