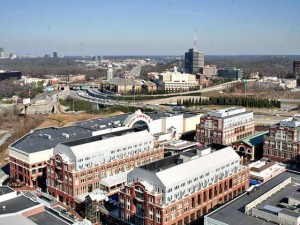 Finally, something about the Thanksgiving holiday that is not what time the stores will open or what are you eating! How about a concert in Central Park with the Jam Out at Black Friday Bash @ Atlantic Station!

What Is Atlantic Station?

If you’ve just landed in Atlanta for the holiday weekend, or just have not ventured ITP (Inside The Perimeter) from the burbs of Atlanta, Atlantic Station is one of the most successful brownfield redevelopments in the country! (The name comes from the Atlantic Steel Mill which use to occupy this site.) Now, Atlantic Station is an almost model live-work-play community located across the Downtown Connector from Midtown Atlanta proper. ( Exit 17th Street via I-85/75 North or South to get to Atlantic Station)

Some 45 merchants and restaurants await you when visiting Atlantic Station. The list (and their hours of operation on Black Friday are below!)

Who Will Be Performing at Black Friday Bash?

Some great groups will be on hand to entertain from 2pm until 9pm!

You Said There were some 45 Merchants at Atlantic Station?

Yes…I did…and it even kind of surprised ME!

I just might be dancing on the streets and in the Park! Hope to see you there!