Buford Highway Food From Around the World

If you love to eat out, then you probably keep tabs on the restaurant opening and closings. And that can almost be a full time job. They can be in a prominent location like Mi Cocina in Midtown which just closed this past week!  And then, you’ll see an opening of another restaurant someplace else….

But there might be World Restaurant Row that you have yet to experience…..and that is Atlanta’s Buford Highway Food From Around the World!

First impressions many have are of run-down apartment complexes, less-than-pretty strip malls…and lots of people walking on man-made trails due to the lack of sidewalks. All of the above is starting to change, but the exotic cuisine from some 20 plus countries is still there for the enjoyment.

The Buford Highway Corridor runs through Brookhaven, Chamblee and Doraville. Here you will find Chinese, Mexican, Korean, Central American, Vietnamese, Taiwanese, Indian, South America, Japan and some delish bakeries including Sweet Hut, which has a store right in Midtown at Metropolis!!

Getting to Buford Highway is a pretty straight shot from Midtown! If driving, you just take West Peachtree to the Buford Highway Connector (which will take you to the GA400 merge as well as I-85 North. But you take neither…you just head North on Buford Highway. 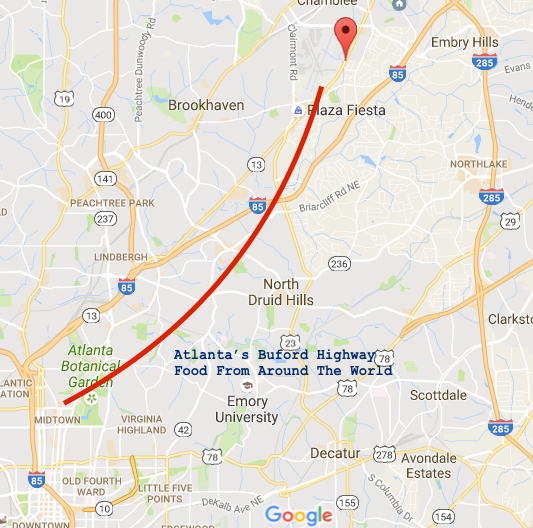