Continental-United Merger Is About to Land!

The Justice Department said on Friday that it has no more antitrust concerns about the merger of Continental Airlines with United Airlines. This combination, when complete, will trump Atlanta based Delta Air Lines which had gained that title when they merged with Northwest Airlines in 2008.

Shareholders at Continental Airlines Inc. and United parent UAL Corp. are set to vote on the deal on Sept. 17, and the Transportation Department has to approve it. The airlines now expect the deal to close by Oct. 1.

We probably will not see much change here in ATL, since neither airline is a big player in the Atlanta Market. However, I would suspect (I don’t travel like I use to so don’t quote me on this…) that as the number of airlines reduce, we may see fares increase.A little less competition in the friendly skies???

Here is a picture of a new United plane, incorporating the United name and the Continental logo. 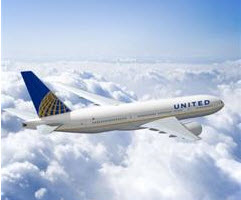