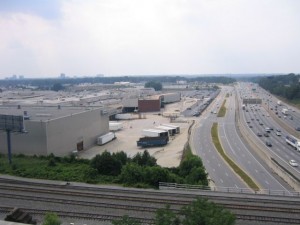 The City of Doraville held its breath as the General Motors Plant closed in 2008 and the real estate market also kind of closed up. Since that time, the parking lot has collected a few weeds (actually a lot of weeds) and the City of Doraville has  burned through a bank account surplus as it failed to reign in spending.

But there might be headlights, or building lights shining in the future. Atlanta developer and civic leader Egbert Perry is leading a team that may be close to striking a deal to purchase the property. And Dorvalle probably could not ask for a better steward….Perry’s company Integral Group, LLC has developed other mixed use projects, and Perry himself is Chairman of the Central Atlanta Progress, the group in charge of the Downtown Community Improvement District.

The GM site is a jewel for development. Located adjacent to I-285 and a stone’s throw from I-85, it has something the Atlantic Station in Midtown West would of loved to have….a MARTA transit station next to it! And studies have already indicated that the brown field cleanup at the GM site will be nothing of the magnitude that was required at Atlantic Station. Georgia Tech also completed a detailed development plan for the site that reconnects the “downtown” portion of Doraville with the site and the MARTA station. I’ve written about the Doraville GM Plant several times.

Burrell Ellis, CEO of DeKalb County has said GM officials suggest they are close to an agreement. “To get to closing, it’s going to take a collaborative effort between the City of Doraville, DeKalb County and state and federal governments.” 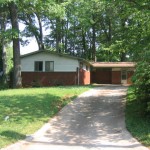 Doraville is a ITP (Inside The Perimeter) community with affordable housing already in place to support the people that would work at General City (that’s MY name, not anyone else’s!!) One community, Northwoods, has just been nominated to the National Register of Historic Places. Built in the 50’s and 60’s, Northwoods is the first planned unit development EVER built in Georgia. One of the original architects, Earnest Mastin was even present at a cocktail reception held to honor Georgia State University’s Heritage Preservation Program, and the Dekalb History Center for their efforts and contributions toward getting the neighborhood listed on the National Register of Historic Places.

Now just might be a good time to pick up a cool 60’s style ranch, renovate it and be ready for the real estate wave.