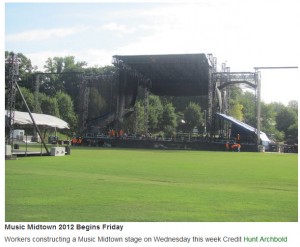 Music Midtown 2012 is virtually here as tens of thousands of music-loving fans will be pouring into Piedmont Park on Friday and Saturday. It’s an exciting event featuring some very popular musical acts, but not everyone is whistling a happy tune.

There are concerned residents from neighborhoods that surround the park who wonder why Midtown must bear the burden in order for the rest of metro Atlanta and visitors to party during a string of spring, summer and fall festivals and events staged in and near the park.

The City does receive financial compensation from Live Nation Entertainment, which produces Music Midtown. According to City of Atlanta Special Events Coordinator Adrienne Wright, the City receives $250,000, plus $1 for each ticket that is sold that is contributed to Mayor Kasim Reed’s Centers of Hope initiative, which helps fund recreation centers and after-school activities for young people in the city, including upgrades to computer labs, security and other IT needs.

As is the case with all gated, ticketed events at Piedmont Park, it is up to the promoter to repair any damage sustained by the park, including turf damage. This year, the base of the two Music Midtown stages will have been in place for a full week before they’re removed.
See on midtown.patch.com