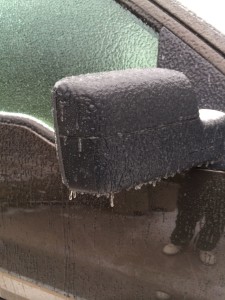 I grew up in Montana.

One year, when I was a kid, we had to snowmobile a mile from the highway into our house…that’s how much snow we had. I think it was the same year when the snow was piled so high on either side of the road, it was like driving in a tunnel. I’ve seen me some bad weather.

But when they predict freezing rain, or an ice storm in the South, it truly brings everything to a grinding halt. It’s pretty hard to do much when EVERYTHING is covered with a sheet of ice. Imagine you could poor water over your entire car, but it freeze the instant it touched it. THAT is what an ice storm looks like.

We are “hunkered down” in our home, well provisioned, with our fingers still crossed we don’t lose power. So far so good, but the day is not over yet.

It’s been a winter alright….even my friends up North have seen their fair share of snow, snow, and more snow. So I suppose a couple days here is not the end of the world. Well, unless you were in a grocery store yesterday afternoon. Then you might have thought otherwise.