Pinewood Studios Atlanta will soon have some new neighbors. Lots of new neighbors. Pinewood Forest is a development of some 1200 single family homes located across Veterans Parkway from the studio 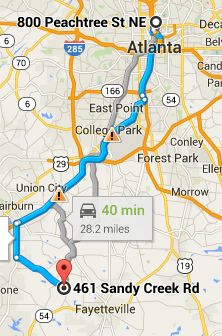 The area encompasses some 228 acres, and along with the homes, a 200-room hotel is proposed and approximately 175,000 square feet of retail space. Simply put, it would be the largest development to ever come to Fayette County. The studio is located Southwest of Midtown Atlanta, as the map on the right indicates.

The film and TV industry in Atlanta is big business for sure. Numerous other studios have either opened in the Metro Atlanta area, or are under construction or proposed. Nearby Pinewood Atlanta Studios, Atlanta Metro Studios is being built on the site of the former Shannon (Union City) Mall.

MyMidtownMojo.com and Thomas Ramon Realty have been able to assist numerous people that have relocated to the Atlanta area to take advantage of the many jobs the industry has created.