805 Peachtree is a great example of the condominium conversions that took place in the late 1990’s before new construction took off a couple years later. 805 Peachtree was a former office building, gutted and touches of South Beach’s Art Deco neighborhood and Bauhaus modernist architecture come to mind when you see the interior and amenities area of this building. The design allowed for only 1 of each floor plan per floor, adding to the distinctive design of the homes and their interiors. 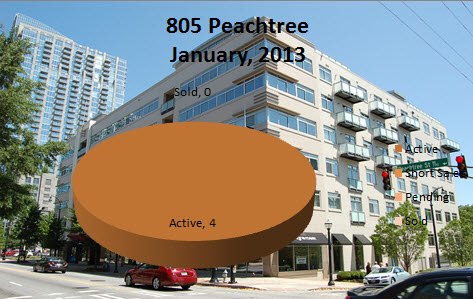 The look at the activity in 805 Peachtree is pretty easy, with no homes Sold or Under Contract in January, 2013.