Viewpoint Midtown is seeing some additional changes in 2014! First off, the new adjacent apartment building, SkyHouse South opened in January. What does this mean for Viewpoint? In particular, those residences that are on the corner directly facing the new building up to the 23-24th floor lost a portion of their view. Secondly, the facade of the first two stories of the building is being renovated to make it more appealing in hopes of drawing retail tenants to the space that has been vacant ever since the building opened. (It would seem that filling retail space was not a priority for the developer, Novare Group.)

And lastly, a new luxury condominium building, Seventh, with just 21 homes is planned to be built on the corner of 7th and Peachtree Streets, where the current Starbucks is located. It will consist of two and three bedroom homes starting at $600,000 and going to over $1M. Coffee people…never fear…Starbucks will be relocated to vacant space in the Viewpoint retail, and will return to the first floor of Seventh once it’s completed.

All these changes, coupled with Viewpoint’s amenity package should keep this a top selling building in 2014! 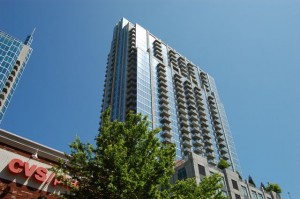