I don’t think it’s a secret in many major cities in the U.S….people would much rather have a 10 minute drive to work than an hour drive each way. But such is the price that many pay to live in the suburbs, have the “McMansion” large home, big yard, 2-3 car garage and good schools for their kids. But don’t think for a moment that Mom or Dad would not prefer to have a shorter commute.

The same may not be so true for the Millennials or Generation Y…those born from 1977-1994. Many having not decided yet if they are going to have children are looking at their living options in a different light.

In an article in today’s New York Times, titled Home Loans for Millennials,  raises some interesting points and questions about the future of the housing market, and where people will choose to live. (Gosh, I even posted on my Facebook wall an article about China and how they are forcing their population into dense urban areas)

“The next generation of potential home buyers prefer to live in developments with an array of housing types close to shops and mass transit, a recent survey shows. Is this bad news for the baby boomers who will eventually be looking to sell their big suburban houses?” the article says.

How will these people shape the Atlanta real estate market? Where are the areas with development with an array of housing types close to shops and mass transit? Well we all know that mass transit is a lack-luster event in Atlanta. But at least we have great communities like Midtown Atlanta and Midtown West that offer multi-family housing options (i.e. condominiums and apartments) as well as surrounding areas like Morningside and Virginia Highlands for single family home options.

“The institute recently released the results of a survey showing the generation’s penchant for urban-style living. About 60 percent say they prefer a mix of housing choices, along with proximity to shops, dining, offices and transit. Seventy-five percent said they valued walkability — a preference that jibes with this generation’s declining number of licensed drivers, according to a report by U.S. Pirg, a nonprofit consumer advocacy group.

Of the 63 percent who said they planned to move within the next five years, nearly 40 percent expect to live in some type of multifamily housing.” 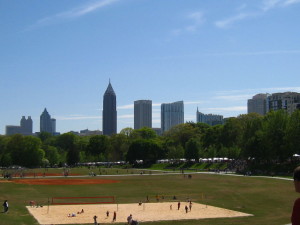 Certainly, Midtown Atlanta is one of, if not the most walkable communities in Atlanta. While we work to build a better retail component in the area, certainly restaurants, entertainment, farmer’s markets and more make it a desirable area to live, and perhaps work, depending on your profession.

The NYTimes article and the study done by the Urban Land Institute’s Terwilliger Center For Housing also said that more than half of the young adults surveyed by the institute are renting, but they haven’t given up on the American dream. In fact, nearly 70 percent said they expected to buy within five years.

If you want to experience the sights and sounds and excitement of the urban lifestyle of Midtown Atlanta, give me a call at 770-713-1505, email me at Info@MyMidtownMojo.com, or if you are ready to start your home search, give me some information and we’ll get the search started.