Music Midtown makes its way back to Piedmont Park this weekend, Friday and Saturday. As with any major festival in Piedmont Park, there will be traffic, trash and LOTS of people!

As a former resident of Midtown, I know what parking, traffic and all is like. I’m just amazed when people do not make use of MARTA as a MUCH easier way to get in and out of Midtown Atlanta during large events like this. But, if you choose to drive, just be prepared as the Historic part of Midtown (East of Piedmont and South of 10th Street) will be on “lock down” and accessible ONLY to residents of the area.

Here is a map of the Music Midtown Street Closure and Neighborhood Traffic Plan.

Here is a site map of Piedmont Park and Music Midtown

You can get ticket information, and performance schedules at Music Midtown’s website.

From the Music Midtown Site: 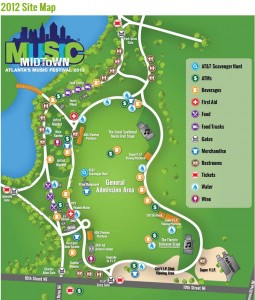 Music Midtown 2012 will be taking place at the same location as the 2011 festival, on two stages in the 10th Street Meadow at Piedmont Park.

Parking will be very limited, all patrons are encouraged to use MARTA, walk, bicycle, or carpool.

There will be three entry gates into the festival.

Guests with VIP or Super VIP tickets will enter through a separate gate on 10th Street. More details will be sent directly to these ticketholders.

The streets will be crowded, and there will be some great music! Enjoy Midtown Atlanta and Music Midtown 2012!