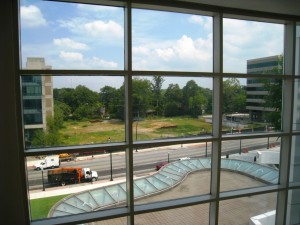 Back before the market crash, I think I had a bit of a “crystal ball” moment. I used to look at all the new buildings going up (and proposed) and said, “This is awesome, all this new construction, but who is going to fill all these buildings?” Well, we know what happened in Midtown Atlanta, and many other cities as well.  But times, they do change, right?

An article in the Atlanta Business Chronicle states the longtime Atlanta developer John Wieland has brought back One Museum Tower to Peachtree Street, across from the High Museum. On the right is actually a photo I took from INSIDE the High Museum, looking across Peachtree Street to the then vacant site back in 2007. At that time, the site had already been sitting there for well over a year.

At Midtown Alliance’s Development Review Committee last week, the building was introduced again, in a much smaller version. The original plans were for a 23-story building with some 90+ homes starting around $2 Million! (I wondered THEN where THOSE kinds of buyers were coming from?)

Fast forward to this week, and we now have a very scaled down One Museum Tower… FIVE story building with only 48 homes, ranging in price from $700,000 to $2.5M. (I again have to wonder, are there that many condo buyers out there for this price point of a condo? Another building, Seventh Midtown has also been announced, pricing to start at $600,000 and go to $1M)

While it’s great to see the wheels of construction begin to turn, I hate to see a prime piece of Peachtree Street not see it’s potential when it comes to a high-rise building. Mind you, I’m sure the residents of Ansley Park (just behind this site) are jumping for joy at a smaller project with out the height!
Let’s see what happens with the new and improved One Museum Tower!
Below is the building proposed about 7 years ago! 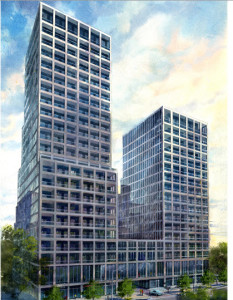