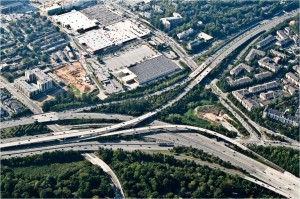 Have you ever tried to navigate the Lenox Road/Buford Highway/Sidney Marcus “triangle” on any given weekday morning or afternoon?

How about the Lindbergh/LaVista/Cheshire Bridge intersection? Does the term gridlock, crazy or avoid at all costs come to mind? Then you know exactly what it’s like to try and get from I-85 Southbound to GA400 Northbound or just the opposite!

Well, help is on the way! The Georgia Department of Transportation (GDOT) held another public meeting this past week, and the neighbors who once threatened to fight to stop this proposed exit ramps have now given their blessing. After years and years of dealing with the congested streets and cars zipping through their neighborhood trying to dodge the mess, GDOT will begin construction of the two ramps.

I had always wondered what bozo designed this intersection and left these ramps off. But having spent a bit more time learning the history of GA400 and its construction (and the fights against it slicing right through Buckhead) I now understand why they focused more on just getting the road built and not so much on these ramps. That said, I think GDOT, and any other organization, past or present, have done some lame planning on the growth of Atlanta and did not have the foresight to see this need. But, that’s water under the bridge and also the subject of another post another time.

For now, we will soon (define soon as a few years of highway construction) we will no longer have to be dancing in the streets as we will be off them and on freeway exit ramps instead. Now, they built the I-85/GA316 interchange in like record time. Ya think you could do the same here?

For more about this story, read about it at the Buckhead Patch.