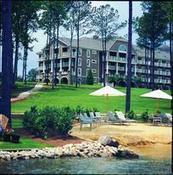 Reynolds Plantation is many things – high-end homes, top-flight golf, a secluded resort. But there’s one thing Robert Merck says it is not: a quick flip. Midtown Atlanta real estate company Daniel Realty will be involved in the project!

Merck, senior managing director and head of real estate investments for MetLife, which is under contract to buy the Lake Oconee community, said in an interview Friday with The Atlanta Journal-Constitution that New York-based MetLife sees its acquisition of the community 80 miles east of Atlanta as a long-term investment.

“I don’t think there are many assets in the country that are comparable to Reynolds,” said Merck, whose company entered the Reynolds Plantation sweepstakes only about two months ago.

MetLife announced on Wednesday it had an agreement to acquire the struggling Reynolds Plantation, six golf courses, four marinas, nearly 5,000 acres of undeveloped land and the Ritz-Carlton Lodge at Lake Oconee.

Birmingham-based Daniel Corp. will oversee Reynolds Plantation. Daniel and MetLife, which have a 25-year relationship, are partners on 12th & Midtown, a complex of office, retail, condos and a hotel near Peachtree and 12th streets.
See on www.ajc.com