A good real estate agent is always on the lookout for the next hot market and area! I’m certainly no different. While I keep tabs on Midtown Atlanta, the current construction boom is all FOR RENT apartments, and not new condo construction. Hence, we search. 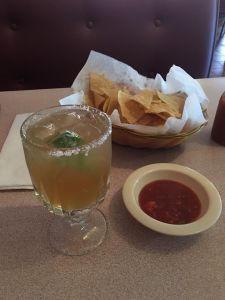 Along with the search for the next hot market, you look for restaurants that the residents visit, so you can let your new buyers know where to dine. Doraville is a sleepy (but not for much longer) city that is 1) ITP …Inside The Perimeter, 2) Affordable for housing, 3) has a MARTA train station, and 4) has some interesting dining options.

One of those is Monterrey Mexican Restaurant, located at 5406 Buford Highway. In fact, it’s just a couple blocks walk from the Doraville MARTA station, so you if you wanted to venture out of Midtown Atlanta, hop a train and have some good Mexican food for a great price, then this just might be the place.

I’ve known about Monterrey for many years. But had not been there for about the same time! I ventured back in a couple months ago when I felt the need for a cold, adult beverage. A margarita did the trick! But the food here is pretty good. I have to highly recommend the Texas Fajitas. They probably call it “Texas” because of the size! It’s certainly a dish you can 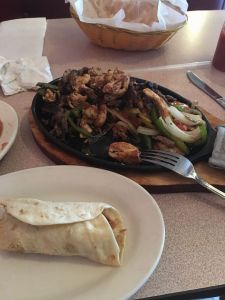 order and split! But as with the usual fajitas, it comes on a sizzling cast iron skillet….packed with chicken, beef AND shrimp, along with onions and green peppers. The side dish of guac, pico de gallo and sour cream is to small for this order…so best order up a side of these fixin’s!!!

The last couple times I’ve been in, it’s been a bit “toasty” inside, and I finally learned they are having air conditioning issues. I’ll have to venture back and let you know. They have an outdoor patio, but it sadly lacks for an inviting atmosphere….(I’ve got to mention this to the owner…..it could be a fun place with!)

The Doraville area offers affordable single family homes, built in the 1960’s. Perfect for a retro-renovation, and a possible addition depending on your lot and the home style. On the other side of the aforementioned MARTA station, you will find the currently empty site of Assembly Doraville. The former GM plant is planned to be an exciting mixed-use development of offices, shops, apartments and condominiums. The developer had hoped for a tax allocation district to move the infrastructure portion of the site along, but the Dekalb County School Board thought otherwise. So it remains to be seen when, and how the site will develop. But when it does, rest assured the home prices you see in surrounding neighborhoods like Northwoods, will be a thing of the past.

I think I’ll grab another margarita.

Interested in knowing more about the Doraville area? Just fill out the Contact Form, and we will be in touch in a jiffy!

The rock and roll of  development keeps on going!

MARTA has announced the developers for mixed-use projects at both the Brookhaven and Chamblee Stations.

Integral Group…already a HUGE player in the area with the redevelopment of the GM Plant into Assembly Doraville.…along with Transwestern Development Company are proposing 330 apartments (gasp……), 25,000 square feet of retail and some 117,000 square feet of office space in the first phase of the project. It’s anticipated that they would not start before Summer, 2017. Further development plans call for senior housing, civic spaces and a hotel. (Brookhaven could use one of those…they are lacking on hotel space!)

Closer to Integral’s Assembly Doraville, a joint venture between Pattillo Industrial Real Estate and Parkside Partners LLC is proposing some 38,000 square feet of office and 13,000 square feet of retail. The article that appeared in the ABC did not indicate which of the lots around the Chamblee station would be used for this building. (Photo/rending below) 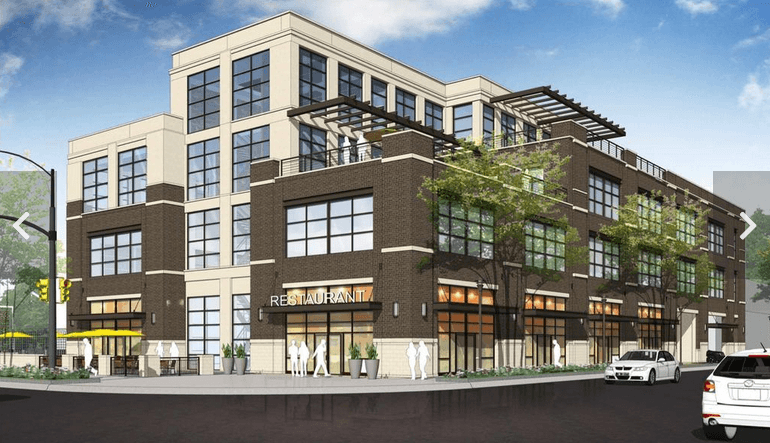 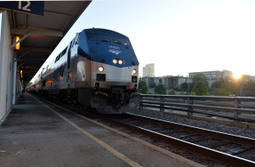 One of the tantalizing “what-ifs” surrounding a possible Amtrak station in Doraville is the potential for Gainesville to gain instant train access to the Atlanta airport.

If, as some suggest, the old GM auto assembly plant can be redeveloped to include an Amtrak station, it would link intercity passenger rail to the existing Doraville MARTA station. Local MARTA and Xpress bus service, too.

An Amtrak train waits to…

Sourced through Scoop.it from: commuting.blog.ajc.com

Company paid $19 million for 20 acres at the 165-acre redevelopment known as “Assembly”.

Sourced through Scoop.it from: www.bizjournals.com

This was not the first news that people wanted to hear from a transit-oriented development, but the Master Plan did call for this part of the site, farthest possible from the MARTA station to be automotive use. Let’s just figure that their new Infinity or Nissan will have low mileage because the will see this cool place to live and work, called Assembly Doraville, and they will move here! 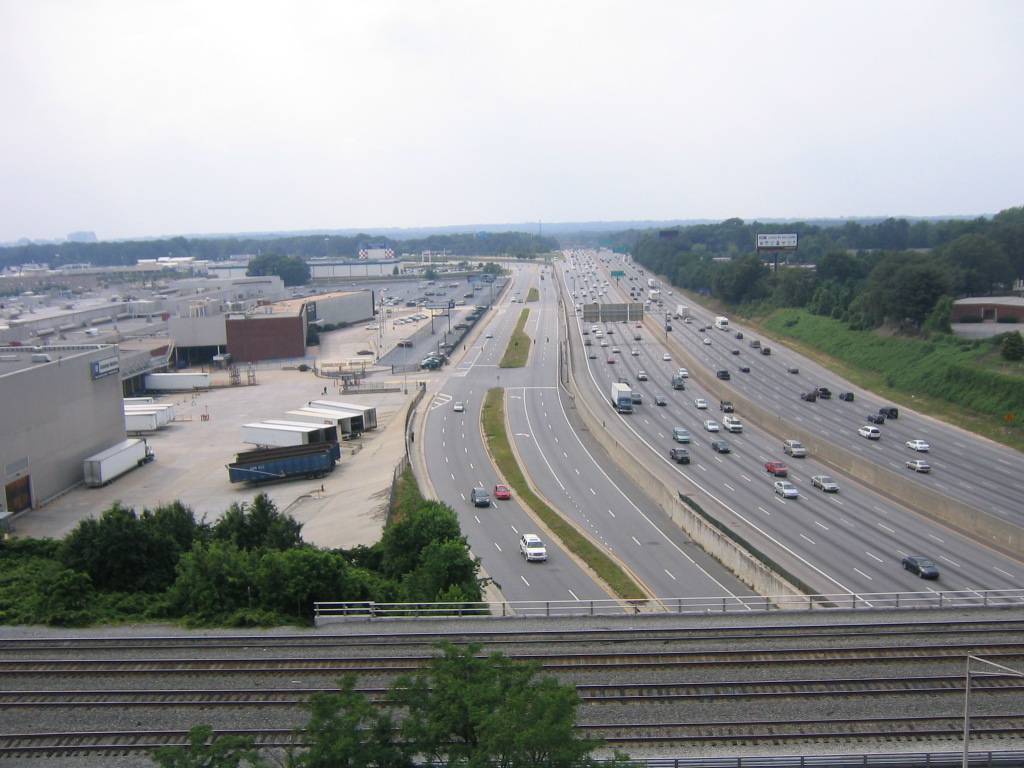 Living and working in Midtown has some great advantages.

You can almost, I say almost not own a car. You can walk from your condo to shopping, great restaurants and the amazing Piedmont Park. Or you can hop on MARTA to a Braves Game (well that won’t be for much longer) a Falcon’s Game, or head to the airport for the weekend escape or out-of-town business trip.

But there is something big brewing if you take the MARTA Gold line in the other direction, Northeast out of Midtown.

Up until now, Doraville has really only been known for four things. The END of the MARTA Gold Line, the GM Assembly Plant, the tank farm and the now ever popular Buford Highway Farmers’ Market. But hold onto your development drawers…it’s about to get busy in Doraville.

Doraville Development News – Is This the New East Atlanta? 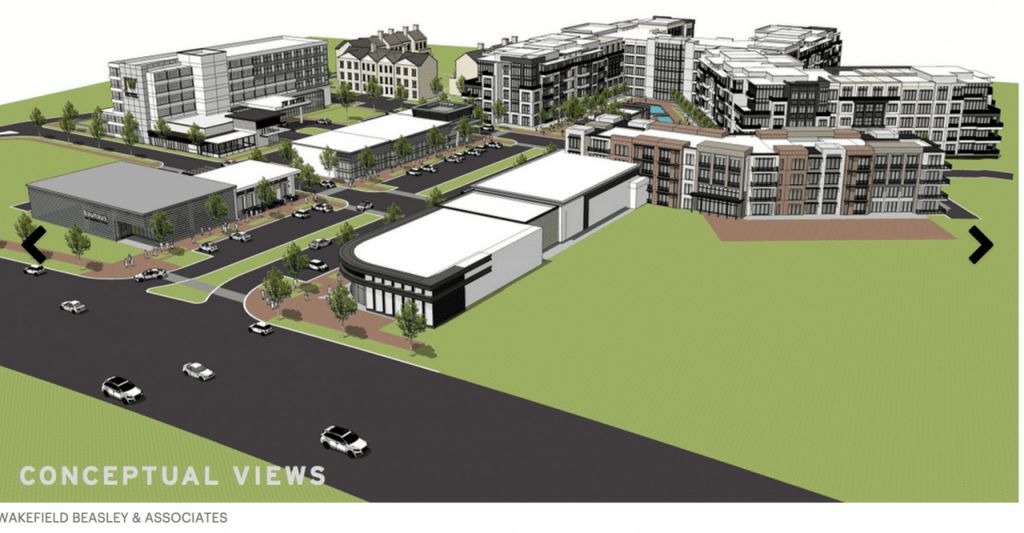 I’ve already written about Assembly Doraville and the proposed transformation of the Doraville GM plant to Assembly – Doraville. Third Rail Studios will be the first “resident” of the Assembly, joining the ever growing list of movie studios in the Atlanta metro area. But even before the dust has settled on the demolition of  the GM plant, more development is making its way to the area.

A development team, including Stephen Macauley of Macauley Investments, wants to add 504 multifamily and senior living units, a 140-room hotel, and almost 44,600 square feet of retail on 13 acres at Buford Highway and Interstate 285. The site is an abandoned Kmart. Wakefield Beasley & Associates is the project architect. This site is located directly across for the Buford Highway Farmer’s Market, and could be walkable to the Doraville MARTA station if the city makes some crosswalk and sidewalk improvements.

The development path is certainly headed North on the Gold Line with such things as Town Brookhaven, Olmstead in Chamblee (across from the Chamblee MARTA station) and now Assembly Doraville.

The developer has named the proposed development “Nexus.” And certainly, the area is a true connection between the future city of Lavista Hills, Tucker, Norcross and Dunwoody/Sandy Springs.

I think the whole path of growth is northward along the Gold Line,” Macauley said in an article in the Atlanta Business Chronicle. Macauley is already an investor in Assembly, which is under construction.

“We I love this entire area,” Macauley said. “We think it can connect the region.”

I’ll be keeping a close eye on this development and how it moves through the planning process in Doraville. This is an area to watch. 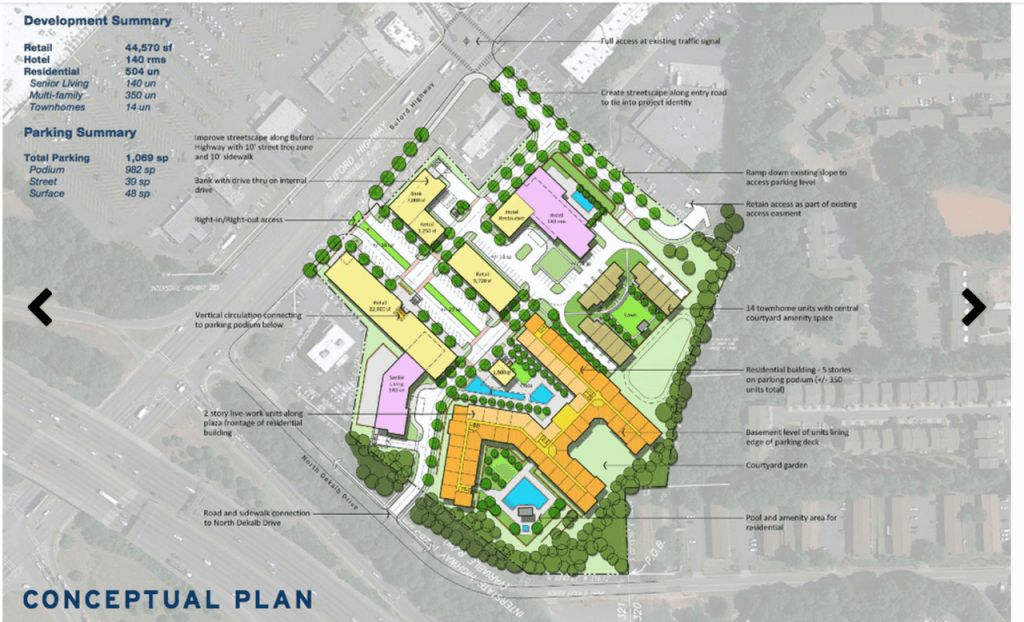 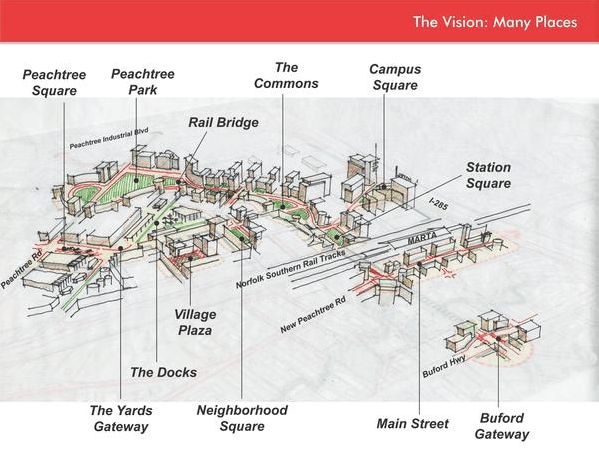 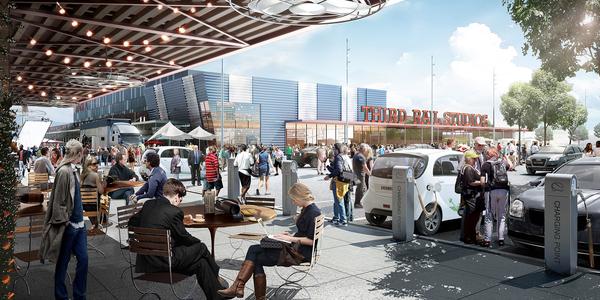