Another corner of Midtown seems to be headed to the winds of change…..StreetLights Residential Proposes 26-story Tower at Juniper and 5th!! 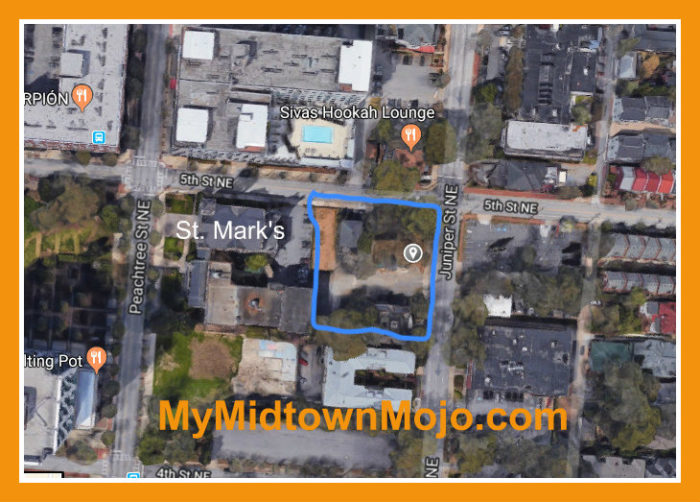 First, to give you your bearings as to where we are talking about, take a look at the map to the right….

There may be one house in the blue square (at the bottom) that may not be part of the site.

This building will rise up some 299 “market-rate” residential units (would this mean a potential change to For Sale inventory would be possible?) over a seven-level parking deck to house some 568 parking spaces. It’s worthy to note that 150 spaces will be assigned to the adjacent St. Mark Church. There will also be a very modest 4,000 sq. ft of retail space.

The project went through the Midtown Alliance’s Midtown Development Review Committee this week. The DRC has some recommendations…

Here is the initial drawing of the building….(dwarfs the church for sure!) 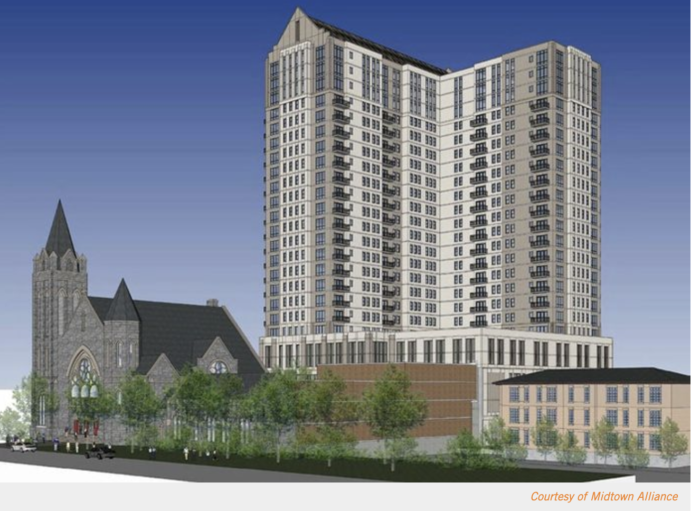 Currently on the site you will find…. 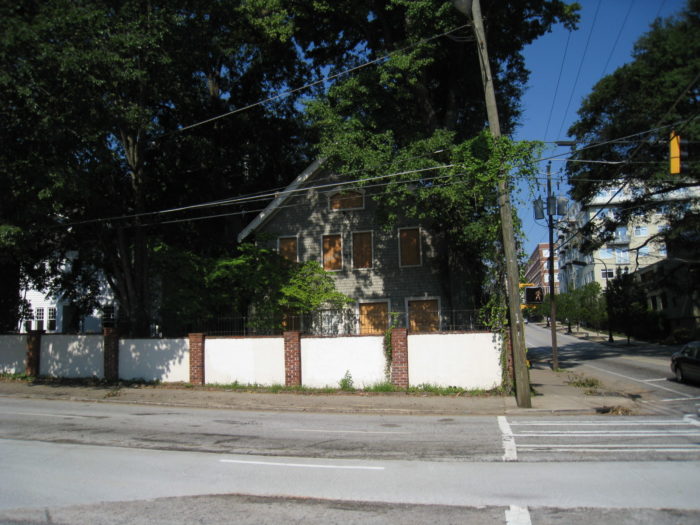 The DRC report indicates the applicant will be back for another review after the above items have been addressed.

You can read the Midtown DRC report HERE! 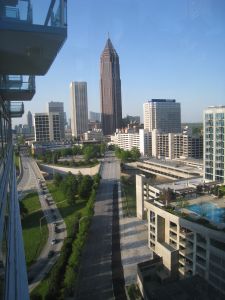 We are always excited when we hear of new corporate relocations to Midtown Atlanta. And the announcement that Honeywell is bringing their Home & Business Technologies HQ to Midtown is no exception!!!

Midtown’s Bank of America building is said to be a favorite to land the project. As the Midtown center grows, they will develop aerospace, automation and control solutions software. (The Bank of America Building is the tall building in the center of the photo on the right!)

As these employees look to relocate from New Jersey to Atlanta, we are excited to help them find opportunities in Midtown Atlanta, and the surrounding communities. Midtown Atlanta is one of the most walkable locations to live in Atlanta! Honeywell employees will have numerous condominium and apartment buildings to choose from. Looking for a single family home? From Midtown, to Buckhead, Druid Hills, Brookhaven, or Chamblee..there are lots of choices.

If looking to be near MARTA transit, which the North Avenue station is just across the street from the B of A Building, then Buckhead, Brookhaven, Chamblee and Doraville are all great options to consider, depending on price, size and style of home you are looking for!

This is also great news for the Bank of America Building which has some empty floors to fill up!

Do you even remember when it looked like this? 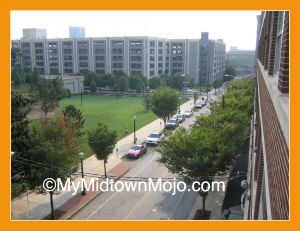 Fast forward to 2016, and that green space that once was, has become Trace Midtown, an apartment building with 290 homes and a unique restaurant space that fronts Peachtree Street.

Caravaca Market will take that space, come Spring, 2017!! The restaurant/urban market concept will occupy some 5,981 sq.ft. and include an “urban market,” bakery, cafe, wine shop and craft beer bar. (This could be nice!) The restaurant is from chef and TV host, Harry Pagancross.

This will certainly bring to life a dead block along Peachtree Street, although many dog walkers I’m sure are missing all that green space that once was. We’ll be looking for the opening of this space next year! Stay tuned!

You can see a rendering of the restaurant at WhatNowAtlanta.com

If you were hoping some of that retail space in ALTA Midtown would in fact be retail…..alas…..you just get to eat and drink more and then work it off!! No shopping, so we will keep you headed to Atlantic Station or Lenox Mall.

The prominent space at the corner of West Peachtree and Peachtree Place will be anchored by Babalu Tacos & Tapas. The restaurant is its first Georgia location with some 5,200 sq. ft. including a 3,100 square foot outdoor dining area. (Shreek!) Plans call for a 2017 opening.

Dancing Goats Coffee Bar will open its third location on Peachtree Place in 2,200 square feet.  Known for single origin coffees roasted right here in Atlanta and local pastries, this is sure to be a hit…since Starbucks at Barnes and Noble (a.k.a. Georgia Tech) is a couple blocks!

Molana, a Persian concept (and a first) will have a full service bar and restaurant in 3,200 sq. ft on West Peachtree.

WhichWich Superior Sandwiches, where you design your own sandwich will be in 1,700 sq. ft.

And once you have ate and drank you way around the building, you can head to Solidcore, a high-intensity, low-impact workout. They will occupy 2,049 sq.ft, alos on West Peachtree.

It certainly will bring some activity to what once was an empty parking lot…..remember this?

Another residential tower is on the rise in Midtown Atlanta…and a “tower” it will be at 39 stories! And it now has a name!

The vacant corner at 14th and West Peachtree (and including up to Spring Street) has long been surface parking lots, as pictured here.

It was first reported back in May, 2014 that The Related Group from Miami had the 2.2 acre site under contract. The complete development calls for two phases, and the first phase, now under construction will be some 39 stories tall with 390-400 residences, with the interior of Apogee Midtown bening designed by Michael Habachy of Habachy Designs.

Another exciting exterior element of the building will be a 95′  by 63′ mural on the building, also by a local artist, HENSE (Alex Brewer) At a prime corner like 14th and West Peachtree, this will be a building that will sure to be noticed!~

Announced back in 2015, the other awesome part of the building will be a flagship Whole Foods Market, which may occupy as much as 60,000 sq.ft. and be the largest store for the organic food supermarket chain in the metro Atlanta area. Plans are calling for a 2018 opening!

And check out the video below about this exciting company, Related Group.

Whether you are visiting Atlanta, or you are in the process of moving here, you know that cranes dot the Atlanta skyline, from Downtown through Midtown and Buckhead and out to the Perimeter. As a real estate broker, I’d like to be excited with all these new buildings…but they come with a catch. They are not FOR SALE condominiums, but are FOR RENT apartments. And not just a couple of them.

In Midtown Atlanta alone, there are 4,200 apartments under construction that will start to deliver as soon as July through the end of 2017. And that does not even count the some 7,000 more units that are proposed or in some form of development stage. That is a bonanza of apartments.

But with all this new construction, comes a challenge I already have faced when my phone rings and a potential renter contacts me about leasing a condo in Midtown. The price. It’s almost impossible to touch a 1 bedroom in Midtown for anything less than $1500 per month. New buildings going up are more than that. One leasing center I visited…the least expensive 1 bedroom starts at $1700 and they go up to $2575….for a one bedroom apartment.

This really brings into question the term of “affordable housing.” I mean, the clerks at the new QT on Peachtree Street certainly will not be making enough money to afford to live in the area.

There was an article this week in the Atlanta Business Chronicle about this very subject. It starts out by saying…

Atlanta has always been known as an affordable place to live, especially compared to cities such as New York or San Francisco, and that affordability has brought young professionals to the city in droves seeking to build their futures.

But, Atlanta’s reputation as an economical city and desirable headquarters for businesses could be in danger. Atlanta now ranks No. 3 in the country for income inequality, apartments rents are increasing rapidly and affordable housing options are drying up.

And that is really true. And when local governments realize this, then the public takes it the wrong way. Case in point is the tax allocation district (TAD) that is currently being proposed for the Assembly Doraville site. This is where the former General Motors plant was, and Integral is now trying to re-develop the site. But it needs a massive amount of infrastructure, including a connection to the Doraville MARTA station that is some 13 railroad tracks away from the actual site. As part of the agreement approved with Dekalb County (NOT the Dekalb County School Board which has consistently refused to even hear a full presentation on the development and the TAD) there was a provision to have a certain percentage of the potential housing units constructed to be made available as affordable housing. The Doraville community — well actually just some nay sayers that have no better plan than to attack the one proposed– were concerned about this housing.

Seriously people, we have to keep all people in mind, and there NEEDS to be a provision with developers to give a certain percentage of their new developments to affordable housing. It’s just that simple. At least to me.

Here is a link to the full article that I have on my website.

Just as Atlanta is overlooking its severe need to expand transit, so must it not overlook that not everyone can live in the glass tower. At least not at the market rates proposed.