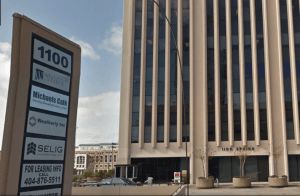 Parkmobile LLC will relocate its corporate headquarters from the Cumberland/Galleria area to Midtown Atlanta’s 1100 Spring Street in October. you might recognize this building tucked between Williams Street/The Downtown Connector and Spring Street. ( I did have to Google Map the address to know exactly which building this was!) It’s primary tenant (and I believe owner of the building) is Selig Enterprises. And you know them for developing such Midtown buildings as Plaza Midtown, 77 12th Street Apartments(and the sister building 60 11th Street–currently under construction) and 1010 Midtown. 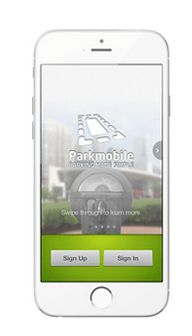 Parkmobile, LLC is the leading provider for on-demand and prepaid mobile payments for on- and off-street parking. Their services are used in more than 600 locations in the U.S. by millions of registered users. Parkmobile’s investors include Fontinalis Partners, Parkmobile Group, Bluefield Investments, BCD Group, BMW Group, SP+ Corporation and Urban Mobility. Fontinalis Partners, with offices in Detroit and Boston, is a venture capital firm strategically focused on Next-Generation Mobility.  With annual global revenues of $24 billion, including $9.2 billion partner sales, BCD Group is an international market leader in corporate and online travel, off-airport parking and the mobile parking industry.

“Atlanta is now our ‘flagship’ location and the goal is to make it a model for mobility technology around the world,”Cherie Fuzzell, CEO of Parkmobile, said in a statement. 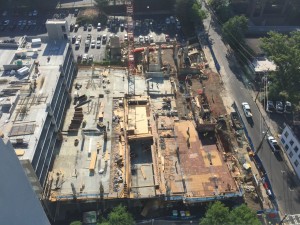 Keeping tabs on what is happening in the neighborhoods where we work is almost MORE than a full time-job! Why? Because there is so much going on!! It’s hard to keep up with all the surrounding areas! I recently drove down a street I’d not been on in awhile, to find an entire section had been cleared and a townhome community was on it’s way. (Ok, admittedly I’d not been on the street in awhile.)

But when it comes to Midtown Atlanta, we do keep the radar on at full power. It seems the Midtown Alliance slipped in a DRC meeting this month that we were not aware of.  And this review was for no small building. And this gives some credit to… 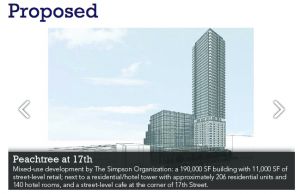 Peachtree and 17th (as it was labeled at the DRC meeting) appears to be a 35-40 story tower proposed for the corner of 17th and Peachtree Streets. Now, if memory serves me correctly, this is the corner that is owned by Dewberry Capital. So, they have either agreed to sell it, or develop it, although their name is not mentioned in the brief DRC review.

What’s so “game-changing” about this building?  Well, first off the location. If you have watched the cranes of Midtown, you know that the focus of development has been between 5th and 12th Streets. So to see some new plans for the Northern part of Midtown that…well…has a pretty quiet street presence is exciting. Secondly, if in fact this building were to rise in any fashion as to what is indicated in this drawing, it would be seen from quite a distance on either I-75 or I-85 as you headed South into Midtown Atlanta.

The drawing also appears to be a much needed break from the solid green glass towers that are the building of choice of architects and developers. Personally, if I was designing any tower in Midtown, I’d want it to be a “Holy Cow, Wow, What is that?” kinda building.

This was just the first pass of this proposed development. So, we will be keeping an eye on it. But with the growing trend of companies looking to be in Midtown Atlanta and close to the walkability of the area as well as the talent pool of Georgia Tech, this my not be to far off in the future.

On another note for North of 14th the New Hotspot…on the map below, you’ll see an arrow pointing to the green space, 17th and Peachtree. The second arrow is the almost 8 acre site owned by MetLife that could be another killer location for an urban corporate campus. We’ve got our eye on this one too! 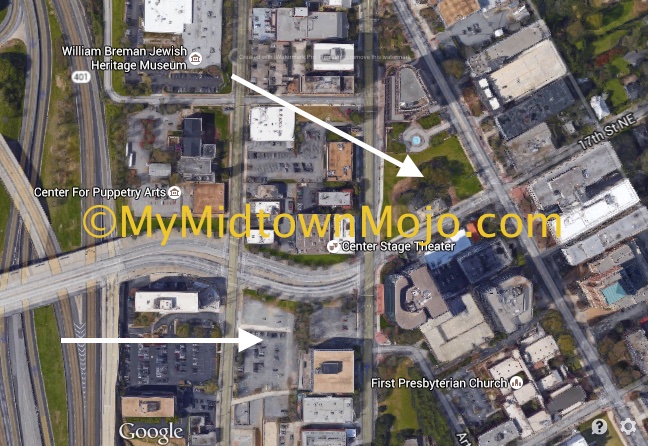 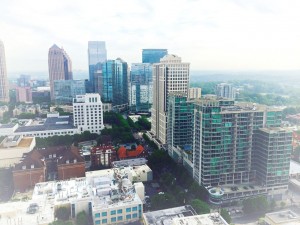 It’s been awhile since the original Blueprint Midtown was conceived. What you see today in Midtown Atlanta, from new condominium buildings built over the last 10 years, streetscape improvements and such, are a result of that plan.

But as we know, all good plans need a review and an update to keep up with the changing times we ALL are experiencing. And so, the Midtown Alliance has announced a series of Open Houses to seek the input of Midtown residents, workers, employers and community stakeholders about what they want to see in the future of Midtown Atlanta.

As I know it, there will be some suggestion boards with ideas already on them, and you will be given an opportunity to “voice” your opinion about these potential projects. This is a great way to really gauge the public’s  thoughts about projects and the future.

You can RSVP (not required, but they would like to have an idea of the number coming!) HERE

The Midtown Atlanta-based E-commerce software startup HubLogix has raised a $3.5 million and will expand its headquarters in Midtown. Hublogix (formerly called eCommHub) helps mid-sized retailers better compete with the”big guys” in e-commerce, like Amazon and WalMart.

The companies software allows online retailers to automate order management processes from checkout to delivery, which in turn can help smaller companies increase the number of orders they can process.

The new capital will be invested in product development, sales and customer support.

Hublogix headquarters is located at 730 Peachtree Street, where they currently employ 30, but will doubling both staff and office space. 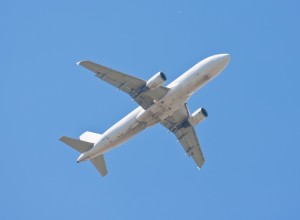 Sources are reporting that aerospace big guy Boeing is scouting Midtown Atlanta locations for a research center. If the center happens, it would join other top companies such as AT&T, Home Depot, NCR and Worldpay US in developing corporate research centers near one of the world’s top engineering schools.

The increase and of new research and development centers and corporate campuses in Midtown Atlanta clearly show the desire of companies to be convenient to the talent pool called Georgia Tech! Of course, for Tech, the establishment of these centers is a perfect pipeline of jobs for graduates as well as the all mighty private sector research dollars for the university at a time when federal research money is harder to find.

No idea as to where the center could be located, but certainly MyMidtownMojo and Thomas Ramon Realty are here to help any Boeing employees that may relocate to the area, and certainly any new hires that are looking to call Midtown Atlanta home.

It looks like a much needed grocery store could appear in Midtown Atlanta…mind you not until 2018!!!!

Whole Foods Market, based in Austin, TX is in talks with The Related Group for a 60,000 sq. ft “urban store” on the site of their proposed 400-unit apartment building at 14th and West Peachtree Streets. The store would anchor Related’s planned project which might include two towers built in phases. The “urban store” format indicates that the store would be on several levels, versus all one level as is common with grocery stores. If you want a cool idea of what this could be like, just venture to Columbus Circle in New York City!

Whole Foods has one store in Midtown, although it’s on the fringe at Midtown Place across from the Ponce City Market on Ponce De Leon Avenue. This location would be somewhat more walkable for people in such Midtown Atlanta condo buildings as 1010Midtown, Peachtree Walk and even a Publix alternative to those in Plaza Midtown, where there is currently a Publix market. Get much further away and you’ll probably see Midtown peeps in their autos…so look for a parking garage! (Will they figure out how to mask it by the time they build this one? Who knows?) 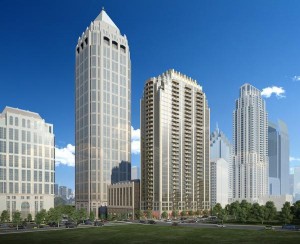 Back in May, 2014, the Atlanta Business Chronicle (ABC) reported that the Related Group had the 2.2 acre site under contract. There are currently two surface parking lots there. At that same time, the ABC article made comment about the ever growing pipeline of apartments on tap for Midtown Atlanta. Of concern is too many of the units hitting the market at once, according to analysts such as Haddow & Co. To many at one time That’s could begin to soften intown rents, which today are well above $2 a square foot at the newest projects.

Keep in mind, this site is just across the street from the new Novare building, at 13th and West Peachtree. So keep your eyes open for yet another apartment crane on the Midtown Atlanta horizon.