I was cleaning my desk up and found an article I had meant to put into a blog post.

Then I thought, well, it’s still some interesting numbers, so why not still share it. The article was in the July issue of (I think maybe Atlanta Magazine?) and has various stats about what the COVID-19 impacts have been, and The Lockdown in Numbers.

We are still struggling to get back to “normal” and you have to wonder what that will actually be. To see the airports bustling…hotels filled with vacationers or business people at conventions. It must come soon, right? 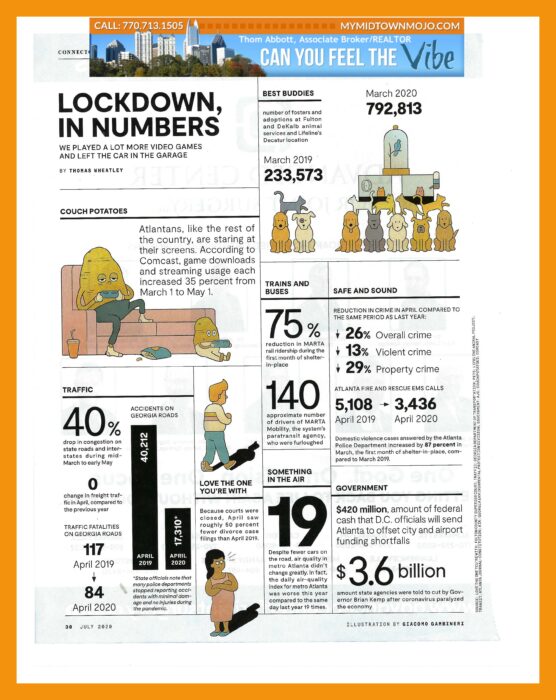 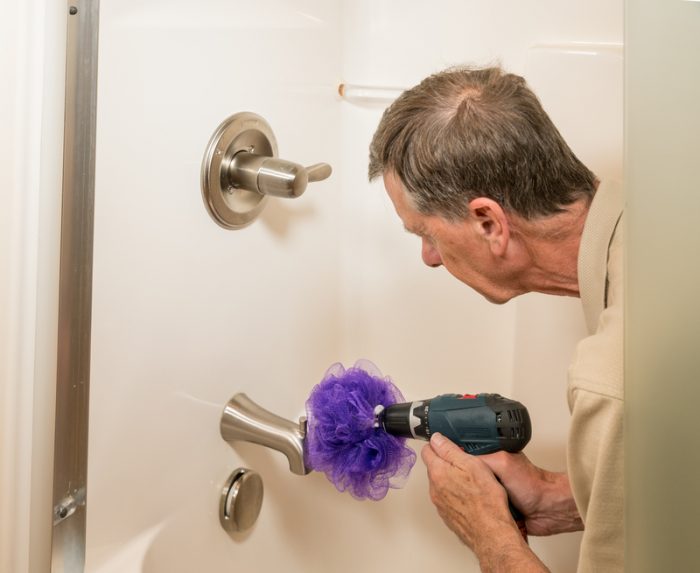 5 Maintenance Skills All Homeowners Should Know

Owning a home can be one of the most important parts of a satisfying lifestyle. The joy of coming home to someplace you can call your very own offers security and comfort. Yet owning a home comes with responsibilities as well; maintaining the home in proper condition is critical to avoid larger problems later. Let’s look at 5 Maintenance Skills All Homeowners Should Know.

And yes, this applies to condo owners as well.

While some people are handier than others, here are 5 maintenance skills anyone can master.

1. How to Turn off Your Gas and Water –If you smell gas or have a water leak, taking quick action to shut off the source to the home while you wait for a professional can save thousands of dollars, and even lives. When you purchased your home or condo, this may have been pointed out to you during your home inspection. These are key things to know. If you have a dishwasher or washing machine that won’t stop filling, you can turn off all the water at the main shutoff to stop any flooding, or at least minimize it.  With gas, of course you want to avoid any potential explosion and/or getting sick from the fumes.

2. Understanding How Electricity Is Fed to Your Home –Learn how to reset GFI outlets and popped breakers at the panel to avoid expensive house calls. Check out this YouTube video!

3. How to Find a Wall Stud – Avoid drywall repair when hanging pictures or shelves. Here is one on Amazon!

4. How to Change Your Air Filters – Keep your air fresh and your HVAC systems running efficiently. Know the size of your filter, and have extras on hand. You can change your filter as often as you desire, but many recommend every other month. Some systems say every 6 months, but that could be to long.

5. How to Address Simple Plumbing – From fixing a running toilet to recaulking the shower, simple plumbing related issues can save money in service calls and damage.

A quick visit to the local big box home supply store or afternoon online watching repair videos can help any homeowner tackle a few simple do-it-yourself tasks around the house. Learning a few basic maintenance skills will ensure you and your loved ones are safe and you’ll help your home stay in top condition.

If we can help you find a handyman to help with these issues, let us know. We also have plumbers and HVAC contacts should you find a problem is bigger than what you may be comfortable handling. 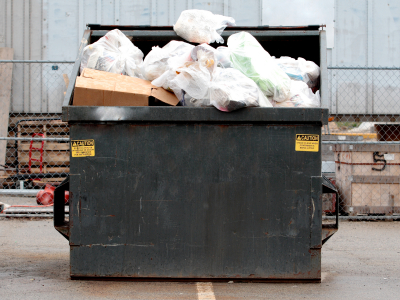 You know you got stuff. It’s everywhere!! Whether you live in a single family home, or a 1-bedroom condo…you just start piling up stuff!

Got a spare hour or so? It’s time to start tossing. Grab a trash bag, a recycling bin and a few donation boxes and get down to business. Working room by room, here are the things you can get rid of right this second.

Kitchen
1. Expired food in your fridge and pantry. (Don’t forget to check all those condiments—they don’t last as long as you think).

2. Recipe books, cards and print-outs you don’t use.

3. Old or one-time use cleaning supplies under the sink.

8. Knickknacks that no longer speak to you.

10. Toys and electronics that aren’t played with or used.

13. Any half-empty bottles or soap remnants in the shower.

15. Any hair accessories, curlers or hot tools that don’t get used.

17. Clothes that don’t fit or you no longer wear.

18. Shoes that are worn out or never worn.

23. Books you’ve already read, don’t like or won’t realistically get to. 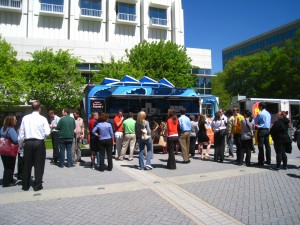 Food Trucks in Atlanta are finally an accepted thing! Amen! But when and where ARE they?

Now, besides the numerous special events that food trucks will show up for, there are regular locations where you can find them:

Brookhaven Food Trucks — The popular Brookhaven Food Truck Roundup, now entering its sixth season, returns to Blackburn Park, 3493 Ashford Dunwoody Road, on May 15. By changing the food trucks’ location this year to the north end of the park near the Blackburn Pavilion, the event now has the added bonus of bordering a brand-new playground to provide entertainment for the youngsters. 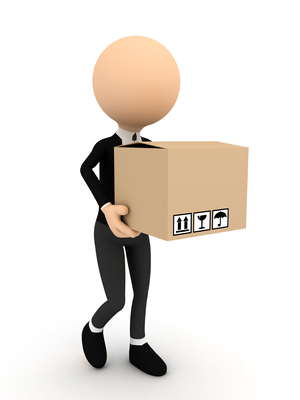 Most of us wish to keep our homes organized. That’s a piece of cake. Yet many individuals have a hard time to maintain their home this way. This is due to the fact that there are some typical actions that can be making it tough for you to remain organized. Here are 5 Organizing Mistakes You Could be Making!

Not Arranging by Feature

Lots of individuals like to sort by shade or group things by their physical similarities. Nevertheless, this could really be making areas such as your closets even a bigger mess. If every one of your shirts are organized by color yet you use specific t-shirts during the week and also other ones on the weekend, this will create you to have to sift with every t shirt you have to find one that is work-appropriate or laid-back enough for the weekend break.

Rather, group things by feature. Maintain all your shoes and also garments organized in a way that makes good sense for your lifestyle and also you will have a better chance of staying arranged.

Organizing Things You Do Not Need

Before you organize your kitchen area or bathroom, sort out what you have and ask yourself if each thing is still essential. For instance, if you are reorganizing cabinets in the kitchen, take every item out of the cabinet and also lay it out before you. Examine each thing and also choose if you must keep it, toss it or give it away!

Now, you only need to organize the products you have left. Organizing items you do not use is a waste of time and will just add to the clutter you are trying to get rid of.

Purchasing Too Many Storage Space Containers

Do you acquire boxes and also baskets with every purpose of getting organized by using them, but they wind up sitting in the garage or your storage unit with a wide variety of unassociated things? Before you invest in storage containers, eliminate anything you don’t really need or use anymore. After that, decide how many and what kind of containers you need, on a list. This way, you buy the right containers for the things you are keeping.

Using Bookshelves as a Storage Unit

It’s easy to transform your shelves into a disposing ground for knick-knacks and also various items you do not have a place for. Actually, the bookshelf should have a really thoughtful design of carefully curated products. Bookshelves are open and also become an eyesore when they’re jammed.

Also the books you display on your bookshelf ought to be the best of the best! Those paperbacks you need to keep…they go in one of those containers.

If you stay in a condo or a smaller house, make sure you have the right furnishings for the space you have to work with. For example, just because houses commonly have a formal dining room doesn’t mean you HAVE to have a dining room table. This could make a great home office or theater room! imply you have to. If you condo has a breakfast bar, and you don’t entertain much, consider not having ANY dining table. It just depends on your space and your lifestyle. Save room for that special piece that came from family or as some other meaning to you!

Looking for even more methods to maintain your residence clutter-free… especially if you are thinking about selling … Give us a call today! We are happy to help you with this process, or give you some resources! 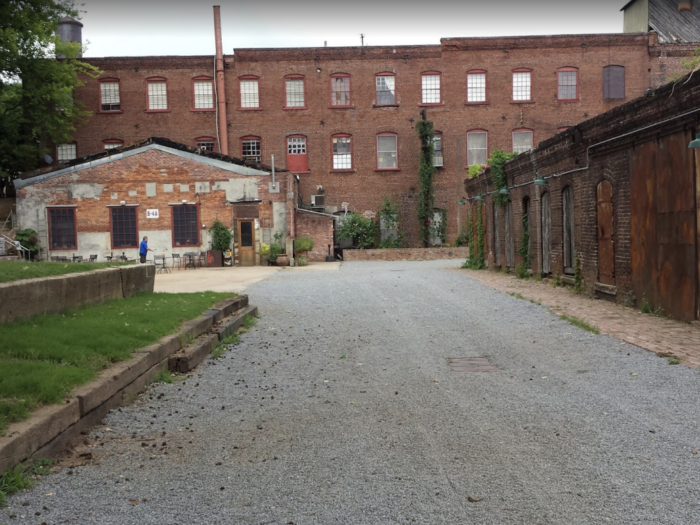 A significant redevelopment is scheduled for the Goat Farm Arts Center, an artist community tucked away in West Midtown that’s very well known for its creative tenants and 19th century warehouses.

The $55 million project would add apartments and artist studios to the roughly 10-acre complex, according to plans put forward to the Development Authority of Fulton County.

The proposal refers to for a four-story apartment building with 240 units, including up to 36 affordable units. The building would be a mix of studio, one-bedroom and two-bedroom units. The project would also include about 50 commercial artist studios and a surface car park lot with 300 spaces.

The investment would come to an area where several of the buildings were originally constructed in the late 1800s, have slipped into a state of disrepair and are losing their functionality and ability to operate safely, says a fact sheet on the project.

The developer is Goat Farm Development LLC, an affiliate of TriBridge Residential, according to the Georgia Secretary of State’s office.

The proposal is scheduled to go before Fulton County’s development authority on March 26. The county will deal with whether to approve almost $2.8 million in property tax abatements over the next 10 years.

Atlanta Business Chronicle first learned of plans earlier this year when tenants said they were told to vacate the Goat Farm by the end of the year.

Sources told ABC that the Goat Farm will have to temporarily close during the redevelopment.

Anthony Harper of Hollister Property Development, which owns the Goat Farm, in February said he could not comment. Harper could not be immediately reached on March 21.

Ben Hautt, co-managing partner of Stream Realty, which has developed adaptive reuse projects including the Ellsworth in the Upper Westside, shared his confidence in a project at the Goat Farm.

” Anthony and the Goat Farm were pioneers and will continue to be,” Hautt told Atlanta Business Chronicle in an email. “Goat Farm was mixing the arts, loft space, and community strategy way ahead of everyone else. No doubt this new development will be prosperous, too.”

A redevelopment at the Goat Farm comes as property values in West Midtown continue to soar.

There’s more than a billion dollars worth of new projects in the pipeline for the area, said Jim Meyer, CEO of Atlantic Capital Properties, which is part of the development team for a $150 million project called 8West that’s bringing 175,000 square feet of office space.

“West Midtown is the place people want to be,” Meyer said.

Other big developments include Star Metals at Howell Mill, Brady Avenue and 11th, where coworking company Spaces signed a lease, and The Interlock, which landed WeWork.