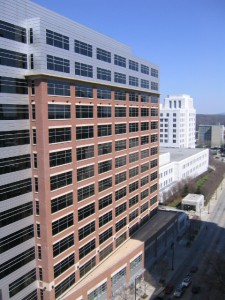 While we all like to hear good news, it’s important to keep it all in perspective. And loan problems are not just faced by residential home owners. Commercial properties have their challenges too.

The Atlanta Business Chronicle reported this week that Ten 10th Street has a $71.4 Million loan secured by the 13-story building, known as Millennium in Midtown (I don’ t think I ever knew that was the name of it!) which has been transferred to mortgage servicing .

The building faces financial challenges after it lost its anchor tenant, PricewaterhouseCoopers, LLP to 1075 Peachtree (12th and Midtown). The story says it will take up to $7 Million to release the space! Yikes!

Another prominent tenant is Google which occupies 32,000 sq ft. on a lease that is set to expire in 2013.

The building was built ten years ago, banking on office space demand for the telecom boom. When PricewaterhouseCoopers moved 800+ people in then, it was a deal that gave Midtown a boost. And it looks like it needs another boost.

Ten 10th Street is located at the corner of 10th and West Peachtree Streets, across from Aqua Condominiums.