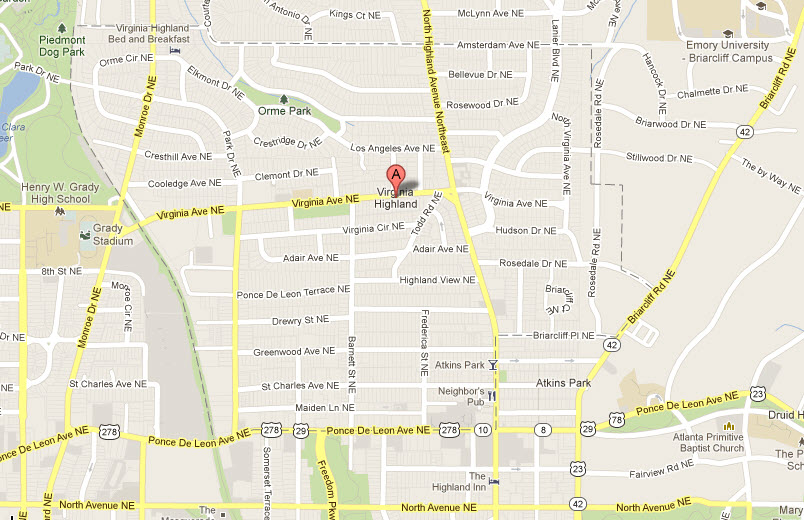 Virginia-Highland (nickname VaHi) is a neighborhood of Atlanta, Georgia, founded in the early 20th century as a streetcar suburb. Located just East of Midtown Atlanta, it gets its name from the intersection of Virginia Avenue and North Highland Avenue, considered the heart of a busy commercial district at the center of the neighborhood. Famous for its its bungalows and other historic houses from the 1910s-1930s, Virginia-Highland is a great Intown Atlanta single family home neighborhood and a destination for people across Atlanta with its eclectic mix of restaurants, bars, and shops and for the Summerfest festival, annual Tour of Homes and other events. 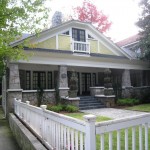 In the 1880s, Georgia Railroad executive Richard Peters and real estate developer George Washington Adair organized the Atlanta Street Railway Company. Their first project was the Nine Mile Trolley, which started serving the area sometime between 1888 and 1890 . Adair built his home at 964 Rupley Drive (still standing and divided into upscale apartments). The iconic curves in the street at the intersections of Virginia Ave. with N. Highland and Monroe are remnants of the trolley line which required gentle curves. The Trolley Square Apartments (now “Virginia Highlands [sic] Apartments”) near Virginia and Monroe were built on the site of trolley maintenance facilities.

Streetcar service to Virginia-Highland ended around 1947, along with all of the other trolley lines into and out of central Atlanta. ( And now some 65 years later, Atlanta is starting to build a street car system, first with a line in Downtown Atlanta. Just goes to show that somethings never go out of style. If all those tracks were still there, or for that matter, if all those trolley lines were still in existence today, it would be an incredible neighborhood..not that it isn’t already!)

In November 2006, the Georgia Trust for Historic Preservation added Virginia-Highland to its list of “places in peril” due to an acceleration of teardowns and infill projects by real estate developers and newcomers to the area. However, Virginia-Highland remains one of the most architecturally historic, distinct and vibrant neighborhoods in Atlanta.

Residents, through the VHCA, succeeded in getting the city council to pass zoning legislation prescribing development that fits the scale of the streets, rolling back loose zoning ordinances passed in the 1960s. The new zoning also prescribes a maximum number of each type of establishment – restaurants, bars, retail and other types.

You can learn more about Virginia Highlands at the area’s Business Association site.