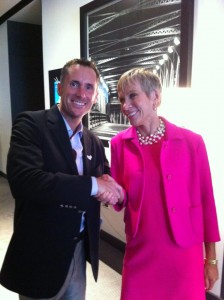 Today was an awesome day! Just lots of good things happening. It’s days like this for me that must be like the electric car when it gets plugged in…..’ahhhhh…juice!’

I’ll save all the other good things for another post…but this just had to get out!

The President of Palmer House Properties, Kevin Palmer, and our Broker-in-Charge, Tod Von Brinegar just returned from Chicago and a national chamber of commerce meeting, where Kevin had the chance to meet Barbara Corcoran! While they were taking pictures, Barbara said to Kevin, “You use these pictures where ever you can to grow your business.” Kevin thanked her for her kindness, but he said she had probably never hear of this little company in Atlanta, Georgia.

Barbara promptly placed her hand on her hip, and replied, “I saw you in INC Magazine last year!” How awesome is that??

I just thought I would share the story with you all….and say that I’m even more proud to say, Thomas Ramon Realty@Palmer House Properties!

PalmerHouse Properties was recognized at the national chamber of commerce conference in Chicago by Barbara Corcoran, real estate entrepreneur, business consultant and television personality best known for her ABC’s Shark Tank show. Ms. Corcoran compared the success and rapid growth of PalmerHouse Properties to her own real estate business, which she started with a $1,000 loan and parlayed it into a five-billion-dollar empire. Ms. Corcoran recently sold her real estate business of 800 agents for $66 million.

Thanks Tom and Kevin…(and Barbara for recognizing us) in creating an enviornment where I can grow my business along with you!