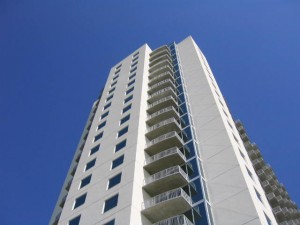 As a real estate agent, I am always asked, “What is your favorite Midtown Atlanta Condo building?” Yikes, I’m always cautious to answer that question, because not everyone wants the same things in a condo building. But, I’ll start by taking a look at 860 Peachtree Street, NE, Atlanta, GA 30308….also known as Spire Midtown Atlanta.

I remember purchasing my Spire Midtown condo back in 2004! It reminded me of what the land rush of the 1800’s to the Western U.S. must have been like, minus technology and all! There was a model of the building located in the center of about a 1000 sq ft. sales center located across the street from the actual building site. And on a wall, there was a listing of the unit numbers for each side of the building. In the time I was in the Sales Center, I would venture that a black dot (reserved) went on a unit number every 10 minutes!

The developer hosted several pre-opening parties where you got to meet your new neighbors! Afterall, Spire Midtown was THE talk of the town! It was the first new building in Midtown following the wildly successful Metropolis Midtown. At the first party, we were given buttons that said “I live on the ____Floor!” So you could look for your neighbors! (I probably still have the button somewhere!)

The moral to this story? I think there is still the same passion about living in Spire Midtown Atlanta. There are still many of the original owners that live in the building. Others, like myself, have sold and moved on for various reasons. But the “community feel” of the building still remains. 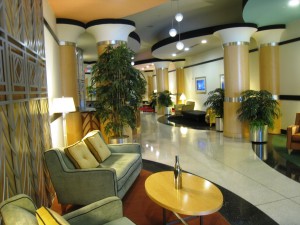 In the elevator foyer, electronic screens display various pictures of Spire Midtown, taken by residents of the buildings. Most residents come and go from the parking level elevator foyers…those were upgraded in the past few years to feel more like a lobby themselves, instead of a service entrance. The actual lobby was transformed from the original rather plain design to the inviting one that is now. (It was the subject of MUCH controversy and talk and I’ll leave it at that!)

Another unique feature of 860 Peachtree Street NE is that every residential floor has a hugh picture window at the end of the hallway overlooking Peachtree Street. It makes the hallways brighter, and just gives you a place to go and look out if you want to!

There is hardly a bad view from any home in Spire Midtown Atlanta, and the building’s street level retail has developed nicely with mainstays like Fresh To Order and newcomers like Five Guys Burgers and a soon to open Mexican restaurant.