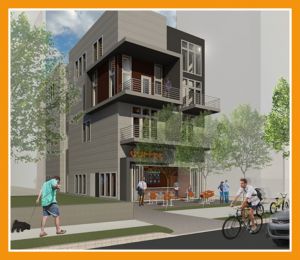 It appears 208th 12th Street in Midtown Atlanta may soon be home to a new condominium development.

What’s Happening Now reports that plans were filed with the City of Atlanta on Wednesday, January 17, 2018. The project remains nameless at this point. A review of the Midtown Alliance DRC meetings back to mid-Sugust, 2016 make no mention of the project, but we would think it had gone through the Committee.

It appears that 208 12th Street will be a boutique building with just 13 homes (expect “boutique to equal pricey!) but will have a small coffee shop/wine bar on the first floor. That would be pretty cool!

We’ll be keeping an eye out for the construction crane…again…on 12th Street!