The folks at Coke are going to spruce things up a bit. It’s going to take them 4 to 5 years to complete a major overhaul of their Atlanta “campus,” but never fear. You won’t even know its going on.

Currently, some 4,000 people (who knew?) work  at the building located on North Avenue, to the North and East of Downtown Atlanta. While not a building of note, it does stand out with it’s logo across the top. The mostly visible 29 story building was built in 1979.

The renovation plans will take place entirely inside the building as hopes to design spaces that will lead to greater collaboration and productivity, with improved technology design consistency. (Hmm, a Coke dispenser NEXT to my cube, not across the hall?)  The plan is still being developed, but Coca-Cola predicts changes to common areas will be visible early next year. Mind you, that is visible to employees. Have you ever BEEN INSIDE the Coca-Cola building? I liken it to a visit to the White House, and I was privy once to go inside the building when Coke was my account in my hotel sales days. It was cool then, especially the cafeteria are with its own Coke store….and yes, I have a nice Coke Truck to show for my visit there.

Coca-Cola is buying  the North American operations of bottler Coca-Cola Enterprises in the fourth quarter.  CCE has around 2,300 employees in the Atlanta area. It is unclear how many of them will move to Coca-Cola’s North Avenue complex after the $12 billion-plus deal closes. Coca-Cola says it is too early to speculate on staff movements.

Let the truth be known…I have a love affair with the Internet. I mean, come on, you can hit up your friend Mr. Google, and it’s amazing what he will find for you.

Really, HOW DID WE live before him/her? Oh, we had encyclopedias…..right.

Perfect case in point….I ran across this amazing site today with some photos of some amazing buildings right here in the U.S. Did you have any idea what the Top 50 Tallest Buildings in the United States are?

While I suspect many of us don’t “trade” in these big guys, it is noted that many of them are in fact condo buildings or mixed use condo/office.

Atlanta’s got a couple in there, including our ranking at Number 9 with the Bank of America Building here in Midtown Atlanta, as seen from my balcony in this picture.

Check out the Top 50 Tallest Buildings in the United States

Life has a funny way of bringing things around in a circle. Know what I mean?

Years ago (I mean YEARS ago) I use to be in the hotel industry. In fact, that is what I got my degree in from the Hilton College of Hotel and Restaurant Management at the University of Houston. Anyway….that’s another story.

The last hotel I worked at was the Hotel Nikko Atlanta which is now the Grand Hyatt Buckhead. Through the power of social media and all, I’ve reconnected with a co-worker from there, Beth Estes. Beth stayed the course a bit longer than me in the hotel industry, but has now branched out into the fitness world. And let me tell you….she looks fab!!! (Hmmm…maybe I need to work out a trade Beth?)

I am going to start featuring a monthly column from Beth about fitness. I hope you will find it useful and informative. And if you are feeling the need to build up that Midtown Muscle, then why not give Beth a call. I’m sure she will whip you into shape in no time!

You can reach Beth Estes at 404.634.7617 or at EatSleepAndExerciseBeth.com 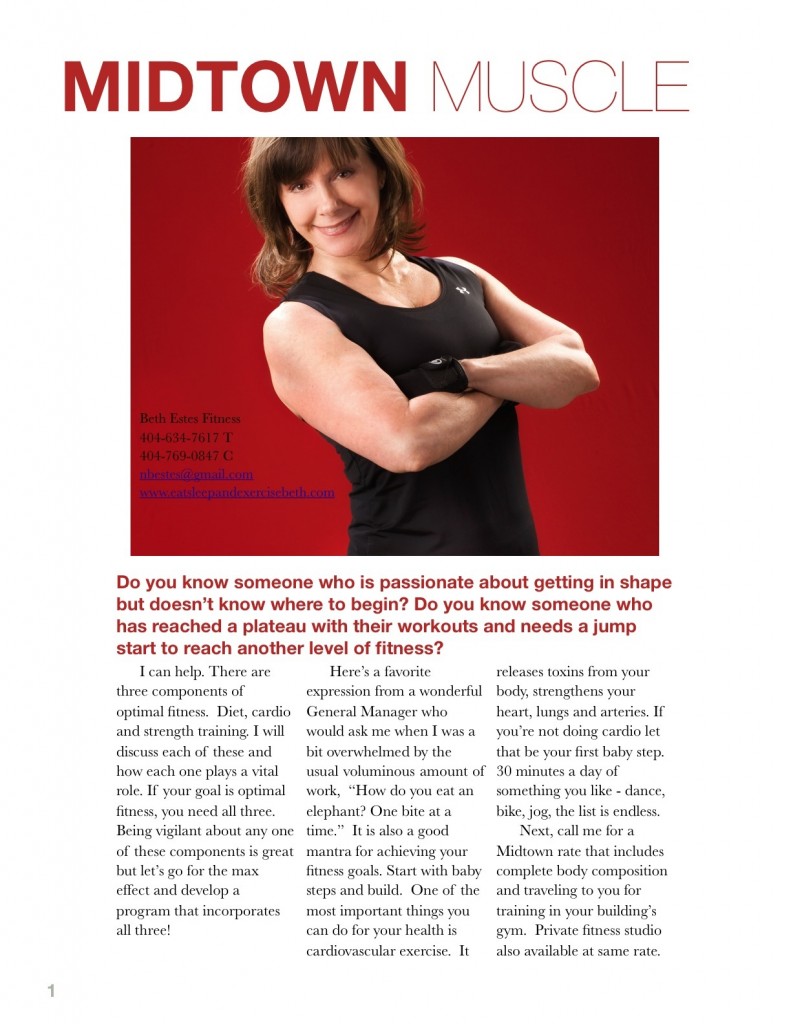