When you live in such a walkable community as Midtown Atlanta, you might not use your car as often as the rest of us do. (Everyday vs. maybe a couple times a week?)

So when you make a trip to the gas station with our current rocket ride of gas prices, you are going to be in for some real sticker shock. Frankly, I’m afraid to look at my local Quik Trip board when I drive by for fear another $.10 will have been added to the prices.

So, WHO does NOT want to save money? And we might as well start with the gas! My good friend and fellow real estate peep, Connie Harvey in Nashville, TN posted a great blog about ways to save on gas. I certainly learned somethings I did not know.

Take a quick look at her post, and keep these tips in mind the next time you head to the station.

As an additional service to my readers, I’ve added a link under Local Resources to the left here to GasBuddy.com. A great resource to know where the cheap gas is! Of course, be careful where you buy gas so you don’t get some crud that screws up your car. But places like Costco, Kroger and Sam’s Club have a pretty good reputation.

RFP Issued For GA 400 and I-85 Interchange Ramps

If you’ve ever traveled South on I-85 and wanted to head North on GA 400, you know what a big deal this announcement is. If you don’t, then here is what the current commuter must do:

Yep. That is how you currently go from I-85 Southbound to GA400 Northbound. A real morning mess. Or mess anytime for that matter. And it’s repeated pretty much when you are coming Southbound on GA400.

I’ve read the interchange was never finished due to money. Could be true. But considering the Metro Atlanta Region’s track record when it comes to planning for transportation, I’d say they just never thought that would be a route people would use. I could be wrong.

Nonetheless, the Georgia Department of Transportation (GDOT) issued a Request For Proposal on January 14th for the build-design services on the proposed project. Of course, it will probably be several years before this project is completed? (Note: If you saw how fast the GDOT finished the I-85/GA316 Interchange in Gwinnett County, you know a project can be moved quickly when so desired….that was finished in record time!)

The State Transportation Board and the State Road and Tollway Authority voted to continue the tolls on GA400 to pay for these imporvements. The tolls were going to expire this summer when the original bonds from the early 1990’s will be paid off.

The current tolls are expected to raise $50 million. The interchange construction is estimated at about $40 million.  The remaining monies collecteed will go toward 10 other smaller projects along the 400 corridor.

For those many Midtown Commuters that head to the business centers of Buckhead or Perimeter for work, this will certainly help some local streets. But, for those that live say in Gwinnett or the Chamblee/Druid Hills areas, this will make the transition to GA400 North MUCH easier.

Of course, NO highway construction comes without controversy, and the residents of nearby Lindridge/Martin Manor have express concern about their quality of life and property values in their neighborhood as the GA400 Southbound ramp to I-85N will be right along their neighborhood. 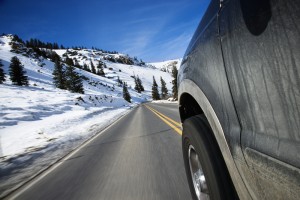 In the next week or so, many will take to the highways for the holidays. Off to visit family and friends, people will choose to drive so they can get all those holiday presents to their destination, along with the family. But driving during this time of year means taking extra steps in a majority of the U.S. states.

The American Automobile Association has some winter driving tips:

You can read more of their tips at AAA Exchange, Winter Driving Tips.

Also, during this time of year, things are hectic for everyone. Rushing to get shopping and holiday preparations done, holiday parties, and of course, the long distance trip we talked about above. Remember these other important tips:

Thomas Ramon Realty wishes you and yours the safest of travels this holiday season. In fact, we will be on the road to New York City and will be keeping these winter driving tips in mind as we hit the road!

I stumbled across this commercial this morning, and just had to share it. We’ve come along way in automobiles, commercials and fashion!

GM Celebrates 75 Years of the Suburban

Ok. I’ll be the first to admit it. Huge. Gas Hog. Over the top? Probably all of these, but if money was no object, it would probably be one of the first things I would buy. Either that or order my custom Prevost Motor Coach. Neither of which has a very small carbon footprint. Oh well.

The Chevrolet Suburban is the longest continuously produced vehicle in America. It first started production in 1934 and as you can see from the picture, compliments of the Chevrolet Suburban website, “she’s come a long way baby!” They have also become the vehicle of choice for families, Secret Service and ranchers. In fact, my Dad had on older version of the Suburban…I often nicknamed it the State Vehicle of Montana….EVERYONE seemed to have one!

On Monday, GM also debuted the new 75th Anniversary Diamond Edition Suburban, which will be available this summer. Only 2,750 will be made. While a Suburban is probably NOT a collector car, I bet a few of them will get snapped up and tucked away for a future Barrett-Jackson auction.

In Midtown Atlanta, the Suburban is often seen in use by limo companies instead of a Lincoln Town Car or Cadillac. But for showing condominium homes, they can be a squeeze to get into some places.